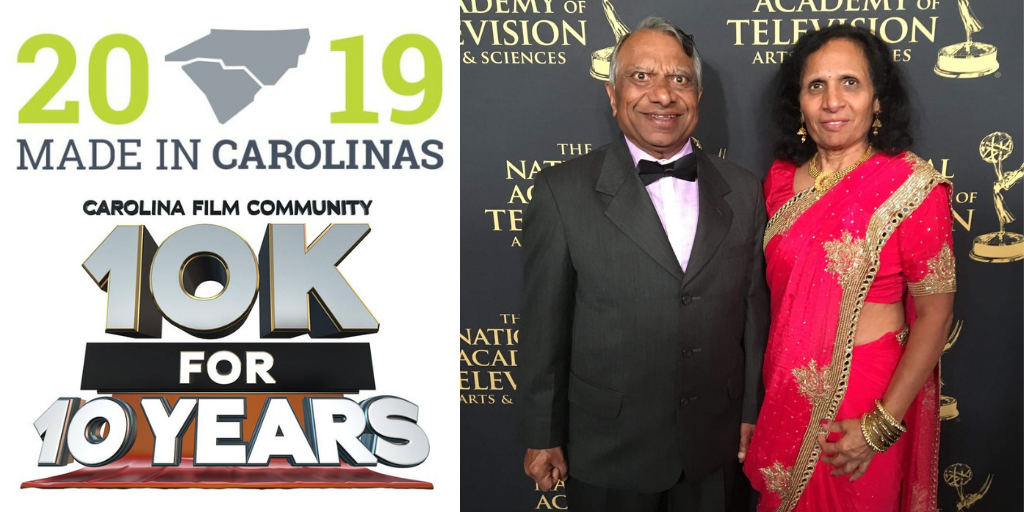 Charlotte, NC – The Carolina Film Community is pleased to announce their red carpet hosts for this year’s “Made in Carolina’s”, the only film contest featuring films made exclusively by, for and in the Carolinas: Vasant and Champa Patel!

Hailing from Charlotte by way of India, Vasant and Champa Patel are no strangers to the film industry, having been major supporters of their son and daughter’s surprise hit documentary, “Meet the Patels”. After exploding on the festival circuit in 2015, the film went to Netflix before getting picked up for the development of a narrative feature through Fox Searchlight last year. While son Ravi and daughter Geeta continue their careers in and out of Hollywood, parents Vasant and Champa are enjoying their own moment in the spotlight. Having been through the struggle themselves, the couple have lots of wisdom to offer other concerned parents of kids who want to take the “non-traditional” route of entering a career in the arts.

“It’s the difference between a hobby and a career,” says Vasant. “That’s why it’s so important for us as a community to support these filmmakers. I see the need because you never live life fully when you don’t follow your talent.” A budding actor himself, Vasant is attending the Full Blown Film Festival this year to support a film in which he played a small role. He also recently wrapped on a local Carolina filmmaker’s debut feature film, “A Small Problem”. Vasant will be speaking at the Charlotte Unconventional Film School next Thursday, August 29th, to aspiring filmmakers and actors about his experience.

This Friday, August 23rd at 11am EST, Vasant will be sharing a Facebook live with Juli Emmons, the Founder and President of the Made in Carolina’s and of its hosting nonprofit, the Carolina Film Community.. A vibrant supporter of building the local filmmaking arts community, Vasant is sponsoring the “Best Directing”’ award this year for the Made in Carolina’s. “There’s a lot of film talent in this area, a lot is happening here,” he nods. “You gotta try. If you don’t try you never succeed.”

Tomorrow’s livestream is to bring awareness to the Carolina Film Community’s current “#10for10for10” Facebook fundraiser, launched yesterday. “Ten dollars, ten donors, ten days”, the campaign is running the last ten days of August. All the money raised goes towards the nonprofit Carolina Film Community, whose goal for 2019 is to put $10,000 back into the local filmmaking community to support the creation of locally-made independent film. Donate and share the Facebook fundraiser.

Celebrating their 10th year serving the local film scene, the Carolina Film Community hosts the “Made in Carolina’s” as the only film contest made exclusively by, for and in the Carolina’s.  This year’s event will be held on Tuesday September 10th, at the Epicenter in Charlotte, NC, and the audience will vote to decide who wins! Red carpet begins at 6pm, and screenings begin at 7pm. Buy tickets.

Over the past ten years the Made in Carolinas has shown over a hundred locally-made short films by new and aspiring independent filmmakers, and given away over $25,000 to support their creation. The Carolina Film Community as a nonprofit is a dedicated resource to the film arts community in Charlotte North Carolina. It advocates for film in both North and South Carolina, and offers education and networking as a hub for the local industry.

The Carolina Film Community is a 501(c)(3) nonprofit. All donations are tax-deductible. All proceeds go to putting on the Made in Carolina’s film contest and to supporting the careers of local independent filmmakers through cash prizes accompanying the awards.

For interviews with Juli Emmons or Vasant Patel, contact rachel@carolinafilmcommunity.com

Watch the livestream with Juli and Vasant here.

Links for the Patels:

Links for the Made in Carolina’s: